Den of Geek says: Known for his creative aliens and hard science, Tchaikovsky is back with the second in a space opera trilogy. Classic ancient aliens feature in this adventurous installment.
Publisher’s summary: The Arthur C. Clarke award-winning author of Children of Time brings us the second novel in an extraordinary space opera trilogy about humanity on the brink of extinction, and how one man’s discovery will save or destroy us all. After eighty years of fragile peace, the Architects are back, wreaking havoc as they consume entire planets. In the past, Originator artefacts – vestiges of a long-vanished civilization – could save a world from annihilation. This time, the Architects have discovered a way to circumvent these protective relics. Suddenly, no planet is safe.
Facing impending extinction, the Human Colonies are in turmoil. While some believe a unified front is the only way to stop the Architects, others insist humanity should fight alone. And there are those who would seek to benefit from the fractured politics of war – even as the Architects loom ever closer.
Ad
Ad – content continues below
Idris, who has spent decades running from the horrors of his past, finds himself thrust back onto the battlefront. As an Intermediary, he could be one of the few to turn the tide of war. With a handful of allies, he searches for a weapon that could push back the Architects and save the galaxy. But to do so, he must return to the nightmarish unspace, where his mind was broken and remade.
What Idris discovers there will change everything.
Type: Novel
Publisher: Solaris
Release date: May 10
Den of Geek says: Ren Hutchings has earned comparisons to Becky Chambers, Alex White, and S.K. Dunstall for her novel. Time traveling spaceships and an alien war bring a classic feel to a modern space opera.
Publisher’s summary: Fleeing the final days of the generations-long war with the alien Felen, smuggler Jereth Keeven’s freighter the Jonah breaks down in a strange rift in deep space, with little chance of rescue—until they encounter the research vessel Gallion, which claims to be from 152 years in the future.

The Gallion’s chief engineer Uma Ozakka has always been fascinated with the past, especially the tale of the Fortunate Five, who ended the war with the Felen. When the Gallion rescues a run-down junk freighter, Ozakka is shocked to recognize the Five’s legendary ship—and the Five’s famed leader, Eldric Leesongronski, among the crew.

But nothing else about Leesongronski and his crewmates seems to match up with the historical record. With their ships running out of power in the rift, more than the lives of both crews may be at stake…
Type: Novel
Publisher: Titan Books
Release date: May 8
Ad
Ad – content continues below
Den of Geek says: We’re weak for a good setting around here, and the ominous Rig at the center of the interconnected story here promises that. Add some speculation about the future of the web and you’ve got a good recipe.
Get the best of Den of Geek delivered right to your inbox!
Publisher’s summary: On a desert planet, two boys meet, sparking a friendship that will change human society forever.
On the windswept world of Bleak, a string of murders lead a writer to a story with unbelievable ramifications.
One man survives the vicious attacks, but is left with a morbid fascination with death; the perfect candidate for the perilous job of working on a rig.
Welcome to the System. Here the concept of a god has been abandoned, and a new faith pervades: AfterLife, a social media platform that allows subscribers a chance at resurrection, based on the votes of other users.
So many Lives, forever interlinked, and one structure at the centre of it all: the rig.
Ad
Ad – content continues below

Ad
Comment:
Written by
Megan Crouse
Megan Crouse writes for Star Wars Insider and Star Wars.com and is a co-host on Den of Geek's Star Wars podcast, Blaster Canon. Twitter: @blogfullofwords
Ad – content continues below
Ad
The Den of Geek quarterly magazine is packed with exclusive features, interviews, previews and deep dives into geek culture.
Get the best of Den of Geek delivered right to your inbox! 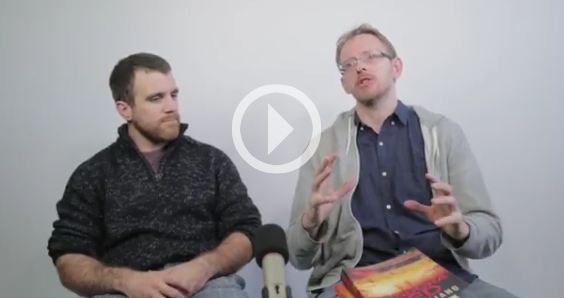