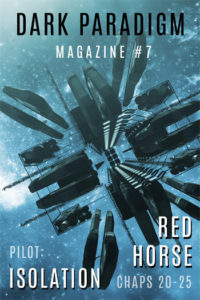 Dark Paradigm Magazine #7 has been released for Patreons and supporters.
Support us and get the magazine at the $5 level or the short story at $2 every month.
https://www.patreon.com/jaytinsiano
Welcome to Dark Paradigm Magazine #7.
This issue we have a sci-fi AI number by Jay Tinsiano called Isolation, as well as the next batch of chapters from Red Horse, the recently released thriller in the Dark Paradigm series.
I will be trying to start a new regular chapbook from issue #8 with the new Frank Bowen thriller (working title: Ghost Spies).
So, here’s the blurb for this issue’s pilot, Isolation. I have had to split it as time ran out and it needs more work.
Officer Briggs, her sole human co-pilot work out their mining contract on the deep space station, Vesta along with their Android crew. When a bio-OS update infects the robots, their behavioural changes spike Brigg’s suspicions. But a lot worse is to come.
Thanks for your support!

Support us with a magazine subscription and access all issues!