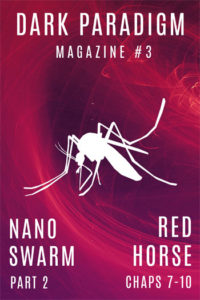 Dark Paradigm Magazine #3 (October) is now up for +$5 Patreons. We’ve also added another $2 Pledge award which will, in most cases be the short story/flash fiction that appears in the current issue. (The first will be posted up this week).

This issue we have the conclusion of Nano Swarm by Jay Tinsiano and another batch of chapters from Red Horse, the upcoming thriller in the DP series.

Nano Swarm Part 2. In the concluding part, Patrice Hicks continues her bid to escape the island and teams up with Manson, the leader of the mercenaries who found themselves to be very ‘expandable’ with extreme prejudice.

Red Horse Chapbook 7-10. Joe heads to Tennessee to meet up with Hugo Reese for an update on operations. His thoughts returning to a ‘fubar day’ in Afghanistan and the question of Jamall.