Dark Paradigm magazine #9 just dropped early 🙂
It’s been a busy first few months of 2018. There’s a lot of ideas, stories and manuscripts flying around and we’re working hard to build a library of great books published by an awesome imprint.
Help prevent starving writers from starving for just the price of a coffee. You’ll get access to all the previous issues plus a copy of White Horse whatever level you opt for.
PLUS the 99 Degrees boxset
(for $5 level Patreons or Gum road subscription until April 3rd)
Support us here:
https://www.patreon.com/bePatron?c=215818

In this second chapbook for Ghost Order, Frank has to consider the offer to work for John Rhodes and leave his family and home once again to face certain danger. The more he hears the more insane it seems.

Isolation Part 3: Jay T thought he would wrap it up in Part 3 but that was not possible. So, one more gripping episode coming next issue.

Officer Briggs has escaped the Space station, Vesta but will the Droids based in the mining facility on Planet Centauri 501 also be infected?
Happy Easter!

Here’s a peak from Isolation:

The pod moved silently in trajectory to the planet’s atmosphere, a swirl of greenish cloud blocked any view Brigg’s might have had of the world below. Briggs relayed the sequence co-ords via comms as the descent began. The pod shook as it buffeted against the winds of the upper atmosphere but held its course, cutting through the rushing cloud until it stabilized and began to drop steadily.
“ETA…five minutes…systems appear stable…,” Brigg’s managed to stutter as the pod vibrated more violently, her dashboard indicators lighting up like a Christmas tree as the pod systems struggled with the demands of its descent.
“We have you on course, Officer Briggs. Prepare for thrust sequencing in…ten seconds,” said control, breaking through the increasing static. Briggs gripped the side of the cabin seat, her stomach lurching inside her. Felt like a goddamn tumble dryer. It didn’t matter how many times she had been through this, any shuttle landing was a bitch to get used to.
“5…4…3…2…1,” the voice from the Android controller was distant, bearable audible.
Briggs focused on the controls, her hands moved to the steering handles and clutched them tightly. She didn’t need to manually bring it in – everything was happening remotely but it made her feel she had some degree of say in her fate. If all shit hit she could at least switch back to manual.
There was a roar from the pod engines as the thrusters kicked in. The pod shook again but the feeling quickly dispersed and the ride smoothed out. On the exterior cams she could see Nemos, a series of six gray storage domes arranged in a circle with the main dock doors in the middle surrounded by red beacon lights. A slit of light appeared as the doors parted to let her in. In the distant, jutting up through a settling mist like skulking monsters, the towering machines pounded the surface in the relentless hunt for minerals.
The pod glided down gently descending. Briggs watched the faint light of the planet’s dawn sky disappear from view, replaced by the dark steel lock of the underground interior. With a light bump finally touched terraferma.
“Touch down success. Welcome back to Nemos, Officer Briggs.”
“Thank you, control.”
Briggs sighed and powered down the engines, switch by switch, running through the final checks before unclipping her belt.
“Dock doors closed, pressure systems on,” the voice came back.
She wanted to believe she was amongst friends now, allies at least.
“Gravity restored. You’re free to exit the pod, Officer Briggs.”
She moved gingerly through the cabin to the outside doors and hesitated before pulling down the handle. A rushing hiss and a green light indicated the lock had withdrawn and Briggs stepped out onto the steps into the huge sprawling bay. A line of other pods skirted a far wall along with a bigger vessel-the passenger carrier, Oasis that had first brought her to this place from Alpha Central. She made a mental note to find out its current condition and launch readiness ASAP. A figure walked across the concourse.
Had one of the pods brought the droids here an update?
It was a question that she couldn’t ignore.
No matter, she would find out soon enough whether she was surrounded by friends or foe. 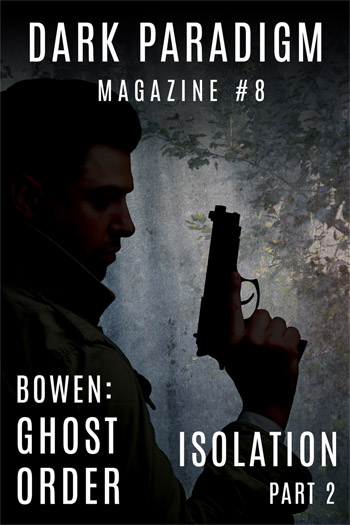